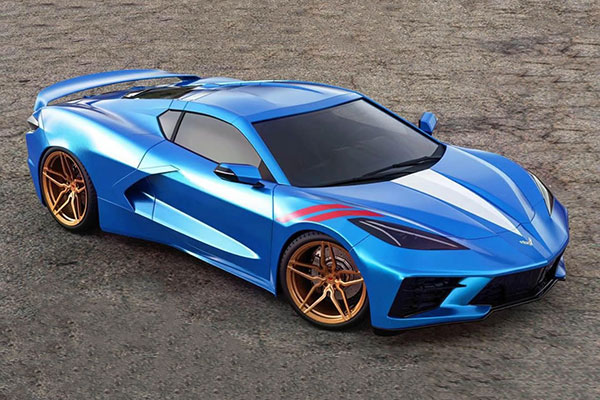 As soon as the 2020 Chevrolet Corvette Stingray was unveiled to the world a couple of months ago, the world started to speculate what future Z06 and ZR1 variants will be like. One future Corvette which hasn’t really been discussed is a potential new Grand Sport.
The C7-generation Chevrolet Corvette Grand Sport slotted above the Stingray and below the supercharged Z06 in the sports car family and if the American car manufacturer launches another Grand Sport, it will likely fill the same position within the Corvette family. These two renderings from Abimelecdesign show how such a car could look.

Immediately distinguishing the Corvette Grand Sport presented from the Corvette Stingray is the fitment of a distinctive white and red graphics package similar to what’s found the on the C7 Grand Sport. In addition, the sports car features new gold wheels and a largely rear wing which we think suits the overall character of the car better than the weird split-wing the C8 was presented with.

The final visual alteration is the fitment of four centrally-mounted tailpipes just like the C7. We’ve always liked the central exhaust layout of the C5, C6, and C7-generation Corvettes and think it would have been nice if Chevrolet retained them for the C8. Nonetheless, there is a chance a future Grand Sport model could adopt them, although we think it is rather unlikely.

If the mid-engined Corvette does get a Grand Sport variant, it could feature an uprated version of the Stingray’s 6.2-liter naturally-aspirated V8 engine with a touch over 500 hp. A plethora of suspension and braking upgrades would also be present.