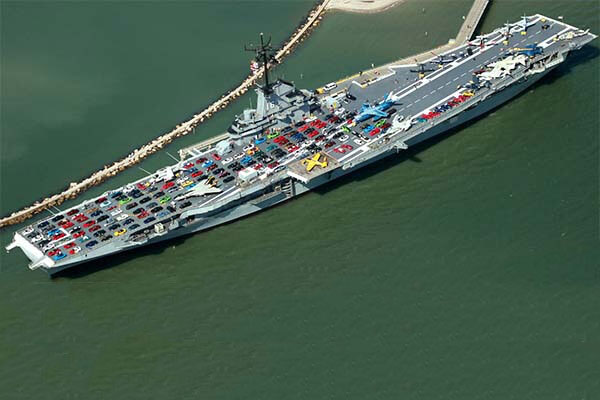 Support for the National Corvette Museum comes in many forms, and for one Corvette enthusiast that support was to provide event registration for the Museum to participate in America: The Car Show.

“We are honoring Bill Thomas, who has been part of our shows for the 11 years that we have been hosting them,” said Island Tom, Director of American Road Crew. “He volunteered for the first show as leader of our snowball cruise and has been involved ever since. He was recently diagnosed with stage four pancreatic cancer so this year we wanted to honor him and his involvement, and he, in turn, wanted to involve the car he loves so much.”

Saturday, October 5 through Sunday, October 6, 2019 the U.S.S. Lexington will play host to up to 350 collector cars on the flight deck of the aircraft carrier in Corpus Christi, Texas. America: The Car Show will be the final show of its kind on an aircraft carrier. At Bill’s invitation, the National Corvette Museum will display a 1962 Tuxedo Black Corvette, donated to the Museum by David Donoho. This particular Corvette was made famous on February 12, 2014 when it, along with seven other Corvettes, fell victim to a 30-foot-deep sinkhole inside the National Corvette Museum’s Skydome. The car underwent a one-year restoration and was revealed on the fourth anniversary of the sinkhole in 2018.